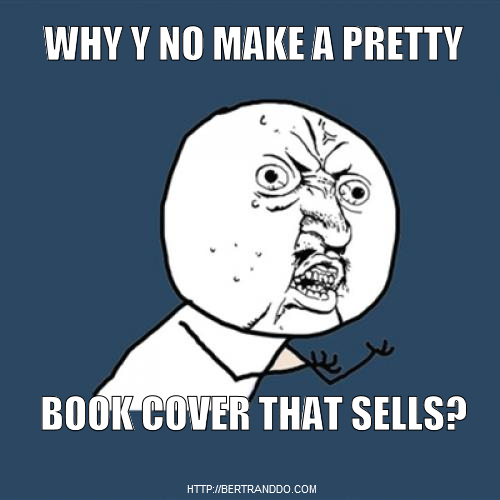 A couple years ago I would go to conferences and not know how to introduce myself.

“I’m studying a PhD in Literature.”

Anything I said turned into a longer conversation with me explaining what I do for a living.

These days, I know exactly how to introduce myself.

Although I still do lots of things, the thing I’m most known for is book cover design.

I design covers for author’s books.

But then it gets interesting.

Like when a “real” book cover designer, who works at a big publishing house, follows me on Twitter.

Only I make covers for self-publishing authors, who don’t have a big budget or a lot of media support or a huge platform. Unlike traditional publishers – who only take on a book if it has a chance of doing really well, either because the author has an established platform or because the book is in a very popular genre – I work on a lot of projects that probably won’t be as successful.

This may be because they don’t have as large of a target readership.

It may be because the authors have no platform and don’t know how to get the word out.

I would argue that, for indie authors, the book cover design is much more important than for traditionally published authors, because it has to do much more and is up against much steeper odds.

Traditionally published books don’t have to fight against stigma, or convince readers that the book is high quality. Indie authors will have to work hard just to get their book in front of readers for a fraction of a second – and the only point of contact is going to be the book cover design.

They’ll see it briefly and if it’s good enough, they’ll actually consider reading what the book is about.

If it isn’t good enough – and many indie published books have awful covers – all that work that went into visibility is wasted. It’s a challenge, and it puts to bulk of the marketing weight on the book cover design – which means the bulk of your marketing budget needs to be spent on book cover design.

Don’t try to cut costs on design so you’ll have a  bigger book marketing budget later you plan to use for advertising – ads will fail if the book cover is ugly. Start with a quality book cover and everything will be easier.

Derek Murphy was a fine artist and philosopher. Now he builds businesses and helps creative people make more money; is finishing a PhD in Literature and is building up a full-time income as a writer.

GRAB OUR FREE GUIDE AND DOUBLE YOUR SALES

Learn how I went from zero to $7000 in Kindle sales in just 14 months.
Click here to download now.

How to fix your story: editing your manuscript will sell more books

The Editing Process As Told By Pro Editors

Facebook TwitterFor those of us who truly love it, there is almost nothing as joyful as writing fiction.... Read More

How to Share Your Life Story With the World

Facebook TwitterWhile everyone has a story to share, there’s only really one story that’s truly and exclusively yours... Read More